The “Circassian House” [«Адыгэ Унэ»], the Circassian Cultural Centre in the Sochi Olympic Park, has been inaugurated and opened to the public on Saturday (1st February), days before the opening ceremonies of the Sochi Winter Olympics this Friday. The Circassian Cultural Centre shall remain open to the public throughout the Olympic and Paralympic Games. The "Circassian House" is one of 25 pavilions of the “Hospitality House” complex, located in the Sochi Olympic Park, by the Adler Black Sea coast, near the landmark Fisht Stadium. The “Hospitality House” has been configured to create a festive cultural ambience in the Sochi Olympic Park, so that not only can the guests from all over the world follow the Olympic competitions themselves, but they can also fully immerse themselves in the local culture and folklore in a celebratory and salubrious atmosphere. Visitors can take part in and enjoy many interesting events: performances of the best music and dance, fun competitions, master classes, savouring the dishes of national cuisines, and photo opportunities with the Olympic Torch "Sochi 2014". Pavilions and houses of hospitality include those of the partners and sponsors of the Sochi 2014 Organizing Committee. The complex can welcome up to 120,000 visitors, and is open from 7 a.m. to 2 a.m. daily. Admission is for free. 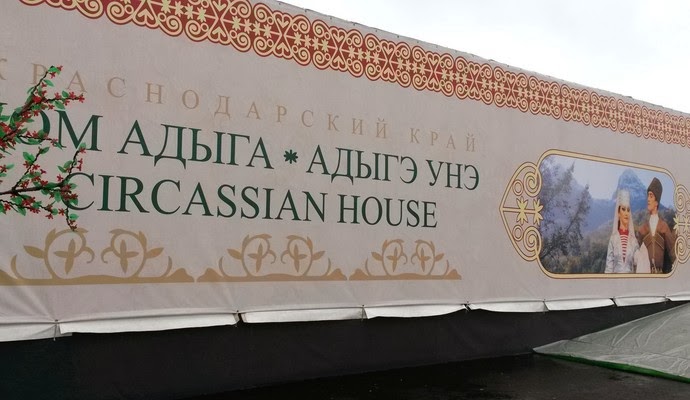 The “Circassian House” [«Адыгэ Унэ»], the Circassian Cultural Centre in the Sochi Olympic Park,
has been inaugurated and opened to the public. [Photo by Helena Rebello]

The setting up of the "Circassian House" has been overseen by the Circassian politician and social figure Mugdin Chermit, Deputy Head of the Department of Internal Policy of the Krasnodar Territory (former MP in Adigea). The Centre is housed in a big pavilion decorated in traditional Circassian style, to give visitors the chance to get acquainted with the Circassian culture, customs & traditions, and to sample the national cuisine. Folk dance and song concerts by Circassian ensembles, including the Adigean State University Folk Dance Ensemble "Nart", will be on show daily. In the traditional "Circassian Guest-House" (ХьакIэщ; Hach’esh) visitors will have the chance to meet Circassian elders and be informed about Circassian history, culture, and customs from the horse's mouth, so to speak. Numerous exhibits from the National Museum of the Republic of Adigea will also be on display, in addition to a collection of dresses designed by the famous designer Yuri Stash. Chermit has been specifically charged with overseeing a substantive Circassian cultural programme to be featured during the Olympics, mainly to appease the Circassians and allay their fear that Russia intends to divest Sochi of its “Circassianness”. 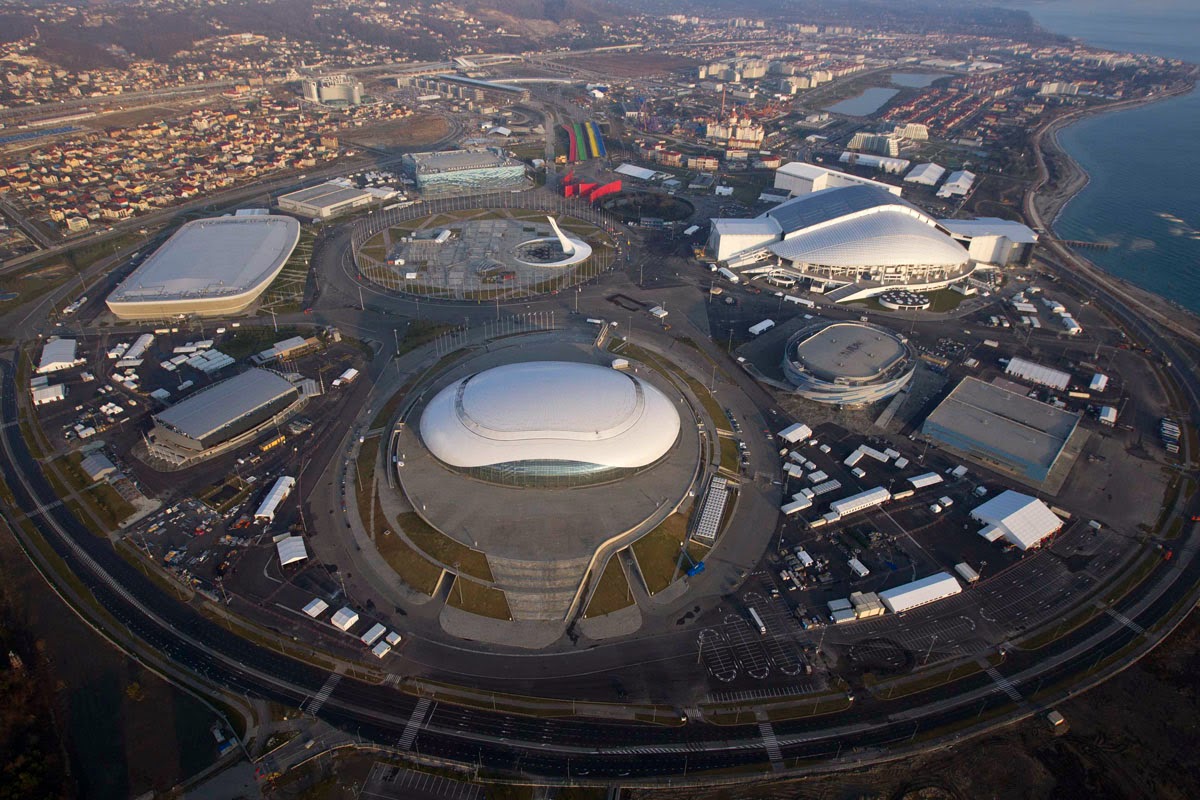 Besides “Circassian House” and Pavilion of the Krasnodar Territory, there are the following pavilions within the “Hospitality House” complex: Exhibition Pavilion of the Regions of the Russian Federation, Japan Hospitality House, Switzerland Hospitality House, House of the Fans of the Russian Olympic Team, Residence of Santa Claus, and pavilions for the following companies: Samsung, Volkswagen Group Rus, Coca-Cola, “Rosneft”, Microsoft, “Sberbank", "MegaFon", and others. Hospitality houses of the NOCs of Canada, the USA, Kazakhstan, and Italy will serve only national Olympic teams of the respective countries. 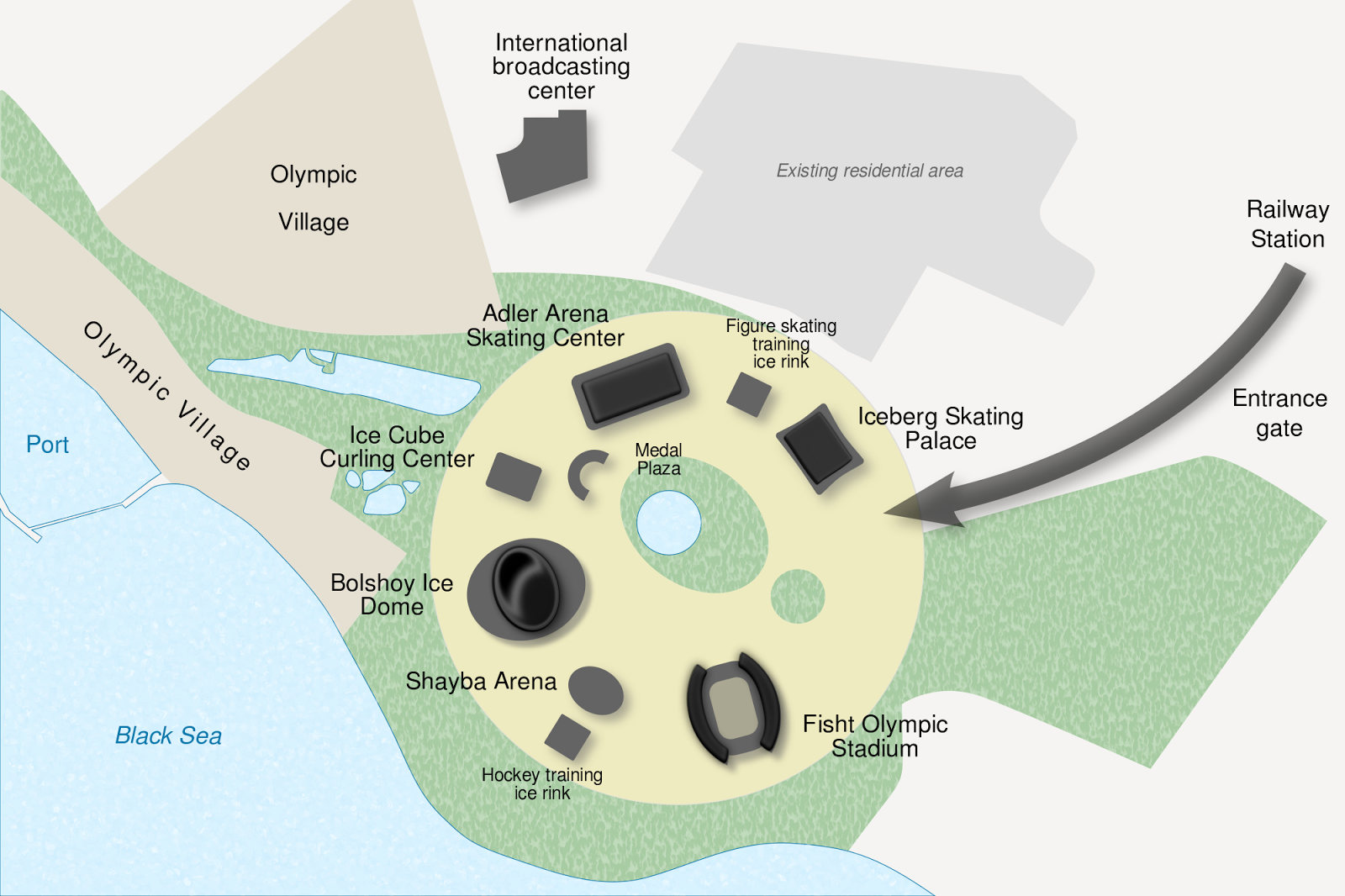 Plan of the Sochi Olympic Park.